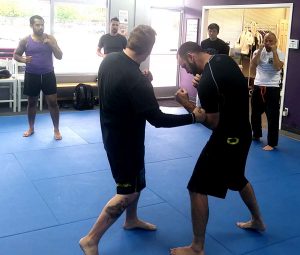 Kali Weapons is lead by Sifu Richard Whittle every Monday evening at 6:00 PM to 7:00 PM

Kali is a Filipino Martial Arts system which incorporates elements from both Western and Eastern Martial Arts.

Ballistic Boxing is lead by Segung Bobby Stroup and Sifu Richard Whittle and held every Wednesday and Friday evening at 6:00 PM to 7:00 PM

Ballistic Boxing has American Boxing as it’s base, but also influenced by traditional Martial Arts such as Jeet Kun Do, American Kempo, Kajukenbo and Kali.

Richard Whittle and Bobby Stroup has over 60+ years combined experience as a martial artist, continues to train, evolve and innovate in martial arts.


No spam, ever. Promise.
We never share, rent or sell your info.
Great first Kali Weapons class, every Monday 6:00

Our little warrior working on her knee-on-belly an